HomeSmart Pays for Me to Travel the World!

At HomeSmart, when we talk to prospective agents or franchise owners, we’re met with questions like: How is that possible? What’s the catch? We get a lot of resistance because people don’t understand how we can do what we do and provide such great value at such a low cost.

So, we want to share some stories from agents who’ve made the smart move and as a result, have taken their saved commissions and reinvested them in order to grow their business and enrich their lives.

M. Joan Martin is a REALTORⓇ with the HomeSmart Professionals Elite group under managing broker, Rich La Rue in Palm Springs, Ca. M. Joan has been an agent for 18 years and made the move to HomeSmart more than four years ago after a chance encounter with some acquaintances.

M. Joan was happy to share her experience making the move to HomeSmart, how she enjoys the commission she worked hard for and why she’s never looking back.

Read the following Q & A about the positive impact switching to HomeSmart’s 100 percent model made on her life. 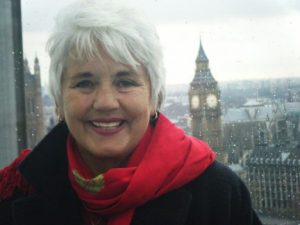 Q: How did you hear about HomeSmart?

A: While I was working at my previous brokerage, I started noticing HomeSmart signs here and there. One day, I had an open house and two fellas came in that I knew and had worked with in the past. I asked them how things were going and they told me they were working with HomeSmart. I asked them if that was the company whose signs I kept seeing and they told me, “yes.”

Not much later, I ran into a former manager of mine and he gave me his card-- he was working for HomeSmart! He told me it was a fabulous company and I said, “That’s it! I’m going to HomeSmart!” He told me he would have Rich [La Rue] call me. After Rich called, I went down, met with him, picked out an office and the rest is history!

Q: Why did you make the switch?

A: I worked for another brokerage for 13 years and started to feel unsettled. In my mind, I knew it was time to go-- that things just didn’t feel right anymore. The same mistakes were being made over and over and I felt I was spinning my wheels. For example, at the previous company, I had to ask for flyers to be printed in color and when I got them it was as if the ink was always running out; we were packed in like sardines and in the meantime, I was paying hundreds for a desk fee and then giving away even more in my commission. It was reasons like those that made me realize it was time to make a switch.

HomeSmart was the only company I considered switching to. With HomeSmart, I can decide if I want my own office or work in the bullpen; if I want a five-color photo flyer, it’s in my pendaflex in an hour and costs just pennies on the dollar. At the other brokerage, I had to wait days and days for the manager to give me my check. Here, everything is online and the transaction coordinator can look at your documents and tell you if something is missing or incorrect and you never have to wait for your check.

Q: Where did your commission go?

In just my first month at HomeSmart, I made enough excess by keeping my commission, that I was able to pay the full year’s rent on my private office at my HomeSmart branch, all of my E&O insurance and the whole year’s worth of my plan’s $99 monthly fee.

I was so excited, I wrote out all the details about how much I saved, what I would have paid my old company, what I made and what my commissions were and shared it all on Facebook.

By keeping 100 percent of my commission, I have cruised from Miami to Barcelona, I’ve crossed the Atlantic by ship twice and I fly there all the time. In the last five years since being with HomeSmart, I have been to Barbados and Costa Rica on two different trips, Florida three or four times, New York for Thanksgiving, Puerto Vallarta, London three times, Ireland twice… my partner and I travel and travel and travel!

Q: What makes you successful in real estate?

A: Two things: open houses and telling the truth. You can’t just treat people as buyers and sellers-- they need to know that they can trust you. Shake their hands, ask them what their interests are, ask them how they’re doing, where they’re from. If you don’t know the answer to something, be honest and tell them you’re not an expert in that particular area. Then tell them what you can help them with. Open houses work gloriously for me. If you make the right impression, people will remember you and how you made them feel and they either become your client or come back later. Open houses give you the opportunity to do this-- open houses work!

A: My favorite thing is that we are cutting-edge with our technology and it’s available to everyone, no matter what your level of expertise. It doesn’t matter if you were raised on computers or raised in a two-house village in the west of Ireland like I was-- anyone can access the technology because it is so simple, it’s smart. No tech person has to stand over you and manage the system for you. It’s not complicated or frustrating to use.

I also really like that we are treated as individuals-- like adults. The systems are in place for us and everything we need to run our business is available to us. It’s one of the very few companies in the U.S. where you really are an independent contractor. Otherwise, you’re working for the man or working for somebody. Here, you can work as hard or as slowly as you like. It’s all up to you, but HomeSmart gives you everything you need to run your business-- it’s all taken care of.

No place is perfect, but if you are going to work in the world with other human beings, HomeSmart is as good as it gets.